In the 1970s the cruise market took off, and so did the hope that the S.S. United States could be converted into a cruise ship. Retired transatlantic passenger liners were a good buy and attracted cruise passengers who had never sailed on the transatlantic legends. In the late 1970s, the Norwegian-flag shipping company Kloster Group sent a team of engineers to inspect the United States as well as the France. They found the ship to be more suitable for conversion. Purchasing her for $18 million in June of 1979, Kloster spent another $130 million on a refit and renamed her Norway, a move that became one of the most successful conversions of the cruising age. Below imagining a converted Norway

Cruise ship United States.Seattle real estate developer Richard Hadley purchased the United States in September 1978, with plans to convert the liner into a super 1,500 passenger cruise ship. MORE
Describing Gibbs as a man “fascinated with engineering but with no interest in people,”Hadley referred to the interiors as “stark”, passengers’ accommodations as “mediocre” and crew quarters as “awful”.Promising the “the finest cruise ship in the world” Hadley’s interior renovations included seven dining rooms, (including the Blue Riband Dining Room), three pools, a full size tennis court, and cabins thirty-five to fifty percent larger than standard cruise ships. The exterior changed with the removal of all cargo handling gear, the addition of two topside decks, an extended deck aft, and a new front for the superstructure. Engine power would be emasculated with the shutdown of the forward engine room and removal of two propellers.
The new decks pushed the ships weight up to 60,000 tons and the cost to over $220 million. About the only thing that would not change was the ship’s name. To finance the upgrade Hadley would invest $35 million; bank loans were to cover the $185 million balance. Hadley’s rigid ideas on everything from financing to staffing never matched the real world of running a shipping company. Unable to adjust his vision with reality the ship went into decline. The Ship’s content were sold at auction. Unpaid docking fees added up and creditors closed in. Hadley’ United States Cruises, Inc. filed for bankruptcy in February, 1992. And the ship went on the auction block. [photonav url=’/wp-content/uploads/2015/04/ship123_edited-1.jpg’]
[photonav url=’/wp-content/uploads/2015/04/ship123_edited-1.jpg’] 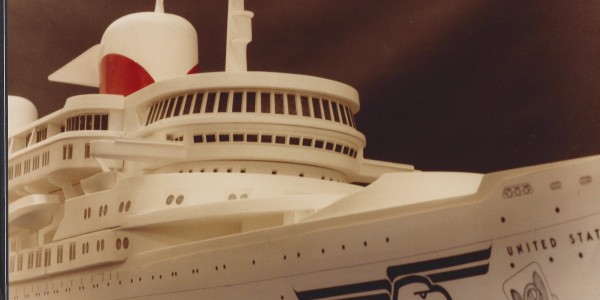 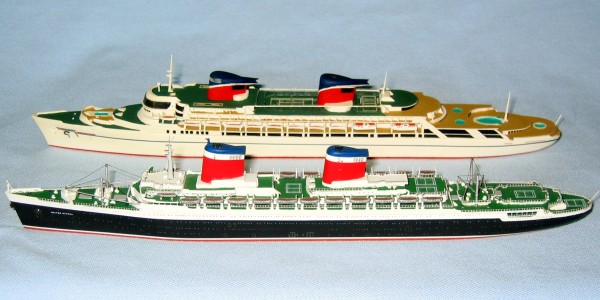 Feb 2016:  Crystal Cruises plans to turn S.S. United States into an 800-passenger luxury liner with 400 suites that measure 350 square feet. Features of the original ship, such as the Promenade and Navajo Lounge, will be retained, even as the vessel’s mechanics are overhauled and modernized. The option to purchase is subject to the ship receiving a satisfactory environmental review. If positive the ship would be seaworthy by 2018.

Unfortunately, the option to purchase was not exercised. The surveyors found the ship’s structuraly sound, however, the cost of converting the ship for the cruise market torpedoes the project. The SS United States is currently docked in Philadelphia under the ownership of the S.S. United States Conservancy. For more information on efforts to preserve visit their web site. https://www.ssusc.org/apparel

LOS ANGELES, August 5, 2016 – Following an intensive, six-month evaluation, Crystal Cruises today determined that while the SS United States is structurally sound, the technical and commercial challenges associated with returning the historic liner to service as a modern cruise ship have unfortunately proven insurmountable. As a show of support for the vessel, Crystal Cruises will be making a significant donation of $350,000 to aid in the Conservancy’s ongoing mission to save the ship. The Conservancy intends to resume its pursuit of stationary redevelopment opportunities for America’s Flagship.