For over one hundred years passenger liners had been racing across the Atlantic in cutthroat competition for the Blue Riband, the prize for the best crossing time. The winners were objects of national pride for they represented the best in a country’s technology, culture, and way of life. For all its industrial might Americans had never been able to field a winner. That was about to change when the new superliner SS United States sailed into New York Harbor.

On June 23, 1952, the new superliner SS United States made her inaugural entrance into her home port of New York. Sailing triumphantly up the Hudson River, fog horn blowing the ship was a sight to behold. A slim trim hull stretched 990 feet, just short of five city blocks. At 53,300 gross weight tons, she was wider and weighed more than the Titanic. Two massive red, white, and blue stacks towered over the ship hinting at the engine power below. From the keel to the top of her smokestacks, the liner stood 175 feet, the height of a twelve-story building. A clipper bow and sleek, uncluttered white superstructure provided the appearance of a serious racing machine.
There was more to the ship than good looks.
The United States was the lifelong dream of William Francis Gibbs, a Harvard dropout one time lawyer, and self-taught naval architect who, despite his lack of formal training, made the cover of Time magazine as America’s premier maritime architect.
Since 1838, steam-driven ships have raced across the Atlantic in cut-throat competition for passengers and national honor. The American flagged liner Baltic won the race for the Blue Riband in 1854; since then, the country produced also-rans in a race dominated by European ships. At the end of WWII, Gibbs, his sense of patriotism offended, set out to build a fast ship and restore American dominance on the North Atlantic.
For the United States, he used a time-tested formula for maximum speed, combining all-out driving power with light displacement. For lightness, he used aluminum in the superstructure. For speed, Gibbs installed high-pressure steam machinery developing 240,000 shaft horsepower propelling a ship of 53,300 gross weight tons The result; was an ocean liner that sailed at a destroyer-like speed of 38.32 knots or 44 mph.
Gibb’s formula fast ocean liner produced a winner. On July 7 1952 the United States cut 10 hours off the Atlantic speed record set 14 years earlier by the Queen Mary. The crossing time from New York to the finish line at Bishop’s Rock UK a little over 3 days and then hours at an average speed of 35.59 knots (1). The ship and her crew were celebrated on both sides of the Atlantic. 150,000 New Yorkers turned out to give the captain and chief engineer a Broadway ticker-tape parade.
THE REST OF THE STORY
SMOOTH SAILING 1950-1958
With her good looks, celebrity status, and luxury, the ship had the right mix of 1950’s glamour to attract the rich and famous. The ship’s passenger list included Hollywood stars such as Bob Hope, Marlon Brando, Marilyn Monroe, and John Wayne. Royalty included the King and Queen of Greece, Prince Rainier of Monaco, and the Duke and Duchess of Windsor.
TROUBLED WATERS. 1958-1969.
By 1969 the losses became unsustainable. On the morning of September 7, 1969, the United States docked at her New YorkCity pier discharged her passengers for the last time. Later that evening, she departed for Newport, Virginia, and permanent layup.
The United States Maritime Administration took over ownership and put it up for sale.
THE UNITED STATES LIVES ON
With a bit of Luck and Divine providence, the United States has survived fifty-three years of various owners and close calls with the scrappers. Today she is docked in Philadelphia under the ownership of the SS United States Conservancy. The dedicated group of volunteers led by William Francis Gibbs granddaughter, Susan Gibbs.
For more information on the current status of the United States, Visit the SS United States Conservancy.
(1) Pete Santos Fox 29 Philadelphia
Read more

In the following pages you will find; 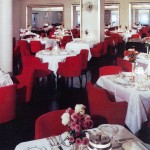 THE SS UNITED STATES FROM DRAWING BOARD TO REALITY. This page brings you pictures in two formats. First, the initial decorator's drawing board plans then the actual final spaces ...
Pictures

Step aboard for a first-class sailing experience. In 1954, the minimum first-class fare on the SS United States from New York to Southampton was $365 ($3,783 in 2022). For that price, passengers sailed on a floating luxury resort offering the refinement, ...
Read More 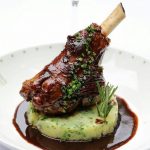 Dining on the SS United States “It was like being in a palace,” recalled the ship’s historian and frequent passenger Frank Braynard. “One magnificent room led to another.” With six meals a day, from breakfast to the late-night buffet, Braynard recalls, “You could kill yourself eating.” ...
Read More

The United States as a cruise ship

Captains of the SS United States

Captains of the S.S. United States