The 1950s and ’60s were known as the days of civilized air travel across the North Atlantic. However, at first, there was more ordeal than glamour. The 20-hour flight in a vibrating unpressurized DC 4 with two refueling stops was enough to keep passengers sailing on the ocean liners. They found staggering round a transatlantic liner in a dinner jacket with a martini was a rational, more reasonable alternative, to shuffling across a cold windswept tarmac to barrack-like terminals in the middle of the night for the mandated refueling pit stops.

All of that changed in the late 1940s with the arrival of the Boeing Stratocruiser and Lockheed Constellation. They provided passengers with speed, comfort, full-size beds, gourmet meals, and a pressurized cabin. In 1960 Pan Am and TWA introduced the jet-propelled Boeing 707 and the glamour kicked up a notch.

To those left on the ground the lucky people who flew experienced a world inhabited by attractive hostesses and the “jet Set’ a new leisure class of celebrities, international playboys, models, celebrities, and carefree college students flying to exotic destinations. Jet air travel became part of pop culture. The romantic lyrics in Frank Sinatra’s hit song “Let’s fly away” evoked a desire to escape the nine to five routine and join the party in the sky.

Today you can still buy luxury in the air but the glamour is gone. It left when competition for the lowest fare gave us no-frills economizing, knee numbing seating, air rage, crowded airport, security lines, and. Today flying has all the glamour of taking a bus.

The following pages take you back to a time when there was glamor in air travel and joy in the journey.

The story of the planes that changed how we fly

TRUE STORIES FROM THE GOLDEN DAYS OF AIR TRAVEL.

Foreign correspondent Eric Margolis recalls his early flights on the Boeing Stratocruiser, a ‘sexy’ Lockheed Connie, and the ‘miracle in sheet metal, a Boeing 707.

And what a revolution it was. I vividly recall as a
child flying in 1949 from New York to Paris in a
prop-driven, Boeing Stratocruiser, a civilian version
of the B-29 heavy bomber.

The Stratocruiser was roomy, but agonizingly slow.
New York to Paris took 14-16 hours, as I recall,
depending on the winds. Prop-driven aircraft of the
era flew much lower than today’s jets, which meant
bumpy, rough rides. I even remember throwing up on
singer Eddie Fisher aboard an Eastern DC-6 back in
the early 50’s, when we were caught in a nasty storm
on the way to Miami. Fisher was extremely gracious.

A circular staircase in the Stratocruiser’s nose wound
down to where the bombardier once sat, a smart
cocktail lounge for the elegantly attired, first class
passengers. In those days, all passengers dressed up to
fly.

I actually had a costly berth bed, with curtains, just
like on trains, and recall feeling terribly guilty I
couldn’t sleep (and still can’t on planes).

Later, in the 50’s, I flew and hated loud, clunky,
DC-6’s. But I loved the gorgeous, sexy Lockheed
`Constellation,.’ designed by Howard Hughes.
`Connies’ were one of the most beautiful planes ever
built, like big, P-38 fighters.

Still, each 16 hour Atlantic crossing was torture.
Then, in 1959, as a teenager, I boarded a
just-introduced Boeing 707 for a flight from New
York’s Idelwild Airport (today JFK) to Paris. . Only
seven short hours across the Atlantic; no rough
weather, and no noise, the other curse of piston
engines. I was thrilled. The 707 was a miracle in sheet
metal.

The robust 707 flew twice as fast, a third higher, and
carried more than twice the passengers of older
aircraft. Its four jet engines were far more reliable and 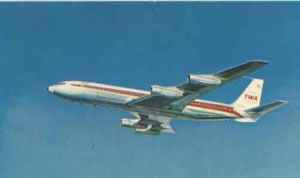 safer than piston engines, which shot out flames at
night, petrifying passengers. The 707 opened the era
of popular air travel and mass tourism, driving
passenger trains, buses, and ocean liners into
extinction.

Britain actually beat Boeing by launching the Comet,
the world’s first commercial jet. But Comet was
grounded after fatal crashes caused by metal fatigue.
My father took one of the first Comet flights. He got
off in Rome,. The Comet took off, and blew-up in
mid-air.

“The Convair 880 flew like a jet fighter and proved to be a challenge to captains who were upgraded from props… For jets, it had a “first love” impact with its agility and maneuverability … The 880 was a Corvette compared to the truck-like 707.” TWA captain Walt Gunn from A Life Aloft

Convair launched two competitors to the 707: the 880

and 990 `Coronado,’ sleek, beautiful planes, smaller
and faster than the stout 707. A Swissair Coronado
set a world speed record in the late 1950’s when the
jet stream boosted it to supersonic speed. But the
Coronados, which I really liked, carried too few
passengers and lost money,. They were taken out of
service. The handsome Douglas DC-8, an excellent,
sturdy aircraft, became the 707’s main rival. France’s
excellent Caravelle jet lacked the range to compete.

Today, most 707’s are out of passenger service,
though many still fly freight, and in military versions.
Boeing is just ending production of 707’s for AWACS
airborne radar and electronic intelligence versions.

Four years ago. I boarded a Pakistani Airways flight
at Lahore and was delighted to discover it was an
original, unmodified, late-50’s model 707, making its
last passenger flight before being converted into a
freighter. It had open shelves instead of stowage bins,
and big, dome lights in the ceiling. I felt in a 50’s time
warp.

But what really amazed me were the seats. The
original economy-class seats were larger, wider and
more amply spaced than today’s business-class seats.
Unlike current passenger jets, there was lots of fresh
air in the cabin, and room to walk around.

This PIA 707 was one of the last vestiges on earth of
civilized air travel.

On June 18, 1946, a Pan Am Lockheed Constellation took off from New York bound for Paris. Shortly after takeoff one of the four engines caught fire. The flames severed the engine’s connection to the wing and it dropped off entirely taking the fire with it. The plane was still over land and the captain made a quick emergency landing in a Connecticut farmer’s field. Both plane and passengers survived the ordeal to the surprise of rescuers who were prepared for the worst.

Instead, they discovered passengers recovering from the ordeal sitting on blue Pan Am Blankets, scattered pillows, with sandwiches cake tea and coffee. Nothing was going to interrupt that flawless Pan Am cabins service, not even a brush with death.

LINKS: The golden age of flying, when flying was a party

2 thoughts on “The days of civilized air travel”