Warning: file_get_contents(https://dev.united-states-lines.org/wp-content/plugins/image-projector/includes/ip-svg-sprite.svg?v=24.4): failed to open stream: php_network_getaddresses: getaddrinfo failed: Name or service not known in /home/customer/www/dev.united-states-lines.org/public_html/wp-content/plugins/image-projector/includes/ip-core.php on line 129
 THE DUKE IS ON BOARD: | S.S. AMERICA, S.S. UNITED STATES Sailing On The 'All American' Team To Europe Skip to content
Larry DriscollAugust 17, 2015April 21, 2017 Big U No Comments 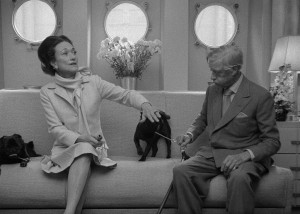 They were regulars on the Cunard Line, traveling with staff of four, three dogs, 126 pieces of luggage and an occasional new car. When Cunard hinted that the couple’s luggage might be a touch excessive, the duchess contacted United States Lines for a better arrangement. She got it. In return for a few public appearance and publicity photos, United States Lines charged the couple minimum first class fare (Cunard charged full fare).
The Duke was the only passenger with an open invitation to the bridge. Captain Tucker remembered those visits. “We would get a call asking if it was all right for the Duke to visit. Of course, the answer was always “yes.” He would show up on the bridge in his plaid sport coat, plaid socks, and wild slacks, and later in my quarters, we would sit down and have a scotch and water and talk. He was a great raconteur, told great golf stories.” The more interesting anecdotes would begin with “Now when I was King.”
As the ex king he still received salutes from passing Royal Navy ships.  British Destroyers were known to flashed by light code ” Give our regards to the Duke”.
Occasionally there was a breakdown in royal etiquette.
Passengers were not permitted in the engine room due to its national defense feature, but in the case of the Duke of Windsor, Chief Engineer Kaiser made an exception. Unable to personally escort the Duke, Kaiser delegated the job to the shift engineer in charge, Bruno.
“Who is it, Chief?” asked Bruno.
“The Duke of Windsor.”
“Oh, Duke? OK, Chief.”
Not realizing who the Duke of Windsor was and under the impression that the visitor’s name was “Duke” Windsor, he started the tour. “Come on, Duke, I’ll show you the boilers. Over here we have the fuel pumps, and over there, Duke, the generators.” etc… The “Duke” enjoyed the tour and never complained about a lack of decorum

This is a test of the text

My memories are of seeing her next to her big sister ship the SS United
States (this is the ship I was on several times) and seeing her majestic
beauty and then going to the website to see what happened to her makes me
sick as I think this was carelessness by whomever was having her towed. She
too could now be sitting next to her sister in Philadelphia still sitting
with pride even though quite a bit older but sitting next to her bigger
sister saying wow we made it. It is so terribly sad even to see the SS
United States sitting in Philadelphia rotting away waiting her fait even
though she was bought by NCL they seem to be beating around the bush. There
never was and there never will be again cruise ships as beautiful as these
two were.